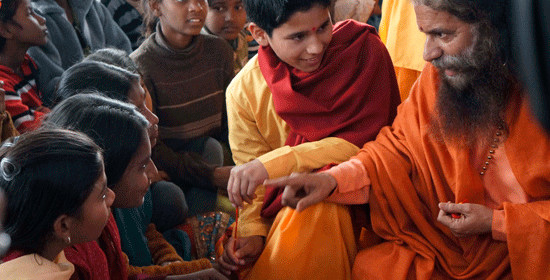 H.H. Pujya Swami Chidanand Saraswatiji’s motto in life is, “In the Service of God and humanity.” Selflessly dedicated to the welfare of all, He leads, directs and inspires numerous, wide-scale service initiatives. Touched by the hand of God at the tender age of eight, Pujya Swamiji left His home to live a life devoted to God and humanity, spending His youth in silence, meditation and austerities high in the Himalayas. At the age of seventeen, after nine years of unbroken, intense sadhana, He returned from the forest—under the orders of His guru—and obtained an academic education to parallel His spiritual one.

Pujya Swamiji is President and Spiritual Head of Parmarth Niketan Ashram, Rishikesh, India, one of the largest interfaith, spiritual institutions in India. Under His divine inspiration and leadership, Parmarth Niketan has become a sanctuary known across the globe as one filled with grace, beauty, serenity and true divine bliss. Pujya Swamiji has also increased several-fold the humanitarian activities undertaken by Parmarth Niketan (www.parmarth.org). Now, the ashram is not only a spiritual haven for those who visit, but it also provides education, training, and health care to those in need.

He is the Co-Founder of Global Interfaith WASH Alliance (GIWA), the world’s first-ever international interfaith initiative which brings together the world’s faiths as allies in ensuring every child around the world has access to safe, life-giving Water, Sanitation and Hygiene (WASH). (www.washalliance.org; www.facebook.com/washalliance)

He is the Founder of:

• Ganga Action Parivar (GAP), a global family dedicated to the preservation of the River Ganga and Her tributaries in their free-flowing and pristine state. GAP work includes everything ranging from solid waste management to wastewater management as well as awareness and educational outreach to make this vision of a clean and free-flowing River Ganga and Her tributaries a reality for all. (www.gangaaction.org: www.facebook.com/gangaaction)

• Interfaith Humanitarian Network/Project Hope, an organization dedicated to disaster relief which has been active in providing both short term, immediate relief as well as long-term permanent relief to victims of the 2004 Asian Tsunami, 2013 floods in Uttarakhand India and 2015 earthquake in Nepal (www.interfaithhumanitarian.org)

• International Yoga Festival at Parmarth Niketan (Rishikesh) held annually from the 1st -7th of March.  In 2018, we welcomed more than 2000 participants from over 100 countries from all over the globe and each year the festival draws countless NRI’s back to India to the birthplace of yoga to truly imbibe its divine nectar at the source, on the holy banks of Mother Ganga, in the lap of the Himalayas. (www.internationalyogafestival.org)

• India Heritage Research Foundation (IHRF), an international, non-profit, humanitarian foundation which launched the first-ever International Edition of the Encyclopedia of Hinduism (www.theencyclopediaofhinduism.com) as well as ashrams and medical clinics in the sacred land of Mansarovar and Mt. Kailash in Tibet. He is the founder and inspiration behind the famous Hindu Jain temple in Pittsburgh and the Minto Shiva temple in Sydney Australia and has played a crucial role in the founding of innumerable temples and Indian cultural centres all across the world.

He is on the Advisory Board of KAICIID (King Abdullah Bin Abdulaziz International Centre for Interreligious and Intercultural Dialogue), which is an intergovernmental organization whose mandate is to promote globally the use of dialogue to prevent and resolve conflict and to enhance understanding and cooperation among different cultures and religions.

Pujya Swamiji’s religion is unity, and he has been a leader in numerous international, inter-faith summits and parliaments, including at the United Nations, the World Bank, the World Economic Forum and the Parliament of Religions as well as with Religions for Peace, KAICIID, the Hindu-Jewish Summit in Jerusalem, the Hindu-Christian dialogue by the Vatican and so many others. He is also a leader of frequent world peace pilgrimages across the world.

However, Pujya Swamiji seems unaffected by this incredible list of accomplishments and remains a pious child of God, owning nothing, draped in saffron robes, living a life of true renunciation. His days in Rishikesh are spent offering service to those around him. Thousands travel from across the globe simply to sit in his presence, to receive his “darshan.” He travels the world, bringing the light of wisdom, inspiration, upliftment and the divine touch to thousands across the world.