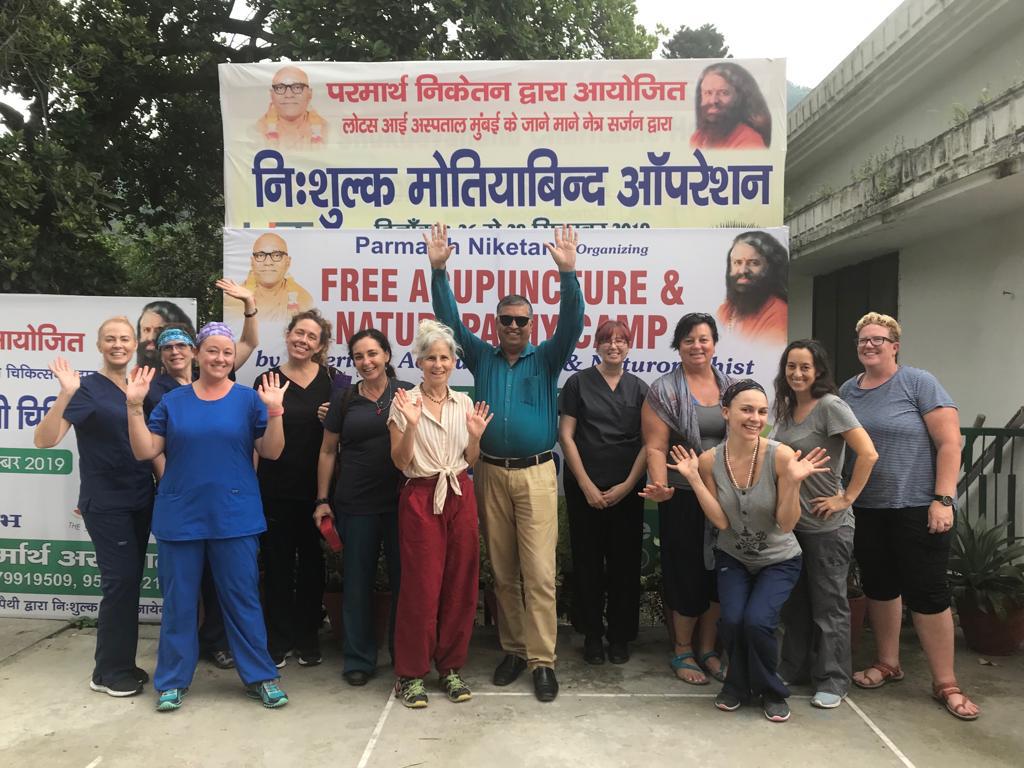 Inspired by a trip to the 2016 International Yoga Festival, Sami Rank felt called to bring acupuncture to Rishikesh. She was so inspired, in fact, that she recently brought her second team of 18 practitioners and administrative volunteers to provide free acupuncture and medical services through the Swami Shukdevanand Charitable Hospital, and the Divine Shakti Foundation in association with Parmarth Niketan ashram.

Over the course of 5 days, these dedicated professionals – guided by long-time hospital resident physician, Dr. Ravi Kaushal – treated 400 patients with a variety of disorders such as joint pain, digestive disharmony, diabetes, sleep deprivation, headaches, seizures, respiratory challenges and more. They even offered emotional support – such caring and nurturing support that most patients visited the clinic several times over the course of the camp.

The staff set-up approximately 15 chairs in the covered entryway of the clinic so they could work as a team, and also have outdoor ventilation to provide moxabustion therapy (burning the herb mugwort to activate healing in the joints) – and those 15 chairs were occupied virtually 100% of the time with people seeking and receiving the care that they so desperately needed.. They even had a massage therapist who provided brief therapeutic treatments, and a few naturopaths who were able to prescribe homeopathy and spinal adjustments. In addition to acupuncture and moxa, this divine group from the United States provided guasha (muscle scraping with herbal oil), as well as a tender ear to listen and an open heart to heal.

One man treated indicated he had knee pain. At the time the camp did not have a translator so that was all the info the team had. Sami herself did a simple treatment and within a few moments tears came to his eyes, he smiled, and pointed to his knee to indicate that he felt better.

A man from Delhi had a chronic digestive disorder. After one treatment he reported sleeping better and his bowel problems were resolved. He returned for a few more visits to consolidate the treatments.

One woman, who was very depleted from chemotherapy, was grateful for nutritional and homeopathic recommendations. She got a few acupuncture treatments to help boost her energy.

One man who came for lower back pain was amazed when after one needle his back pain was gone, and remained gone for the following days (he came back for his knee pain on the subsequent days).

One of the ashram residents was very depleted and feverish. After his treatment he came in the next day much revived.

Two sisters with headaches felt relief after their treatments, and expressed much gratitude to the team’s interns on the streets of Rishikesh.

At least two of the Swargashram vendors came regularly to the clinic; they were so happy to see them in the streets and it made the team feel at home.

Several people came to the camp that had come the previous year. This made the team feel at home and that their treatments had some positive impact.

One thing that made the camp so special for the team was that they felt immersed in a new culture, as opposed to simply being witnesses as tourists would be. According to Sami, the team’s other favorite moments, besides the joy expressed by the patients, were the sounds of cows walking past the clinic.

One team-member – Sami’s mother, Debra Podjed – was particularly moved by the experience. We’ll let her tell you about it:

I arrived in Rishikesh from the United States to do seva with my daughter, Sami Rank, who headed the Acupuncture/Naturopathy Medical Camp which included 18 interns, volunteers, and practitioners. Immediately, Rishikesh felt like home as I walked the narrow streets in rhythm with the cows, slow and pondering — taking in impressions. Home — as I prayed and dipped my feet in Mother Ganga. Home — at Parmarth Niketan Ashram where Pujya Swamiji, Sadhviji, and those in service make the world a better place through all that they do for the people and for the Earth.
When I took my first breath at birth, the Sun, Moon, and Mercury were over India — I have always felt her in my Heart. I studied tabla with Swapan Chaudhuri at the Ali Akbar College of Music in California, and later played tabla for kirtan. As I experienced the music at Parmarth evening aarti I was home. To finally be in India — to feel her rhythm, her music, her people, her Holy Mother River, and to offer prayer, devotion, and medical seva to her people was an opening of my Heart.

Ravi Kaushal, MD, has been in practice in Rishikesh for over a decade, and has shared his fine skills and professional demeanor with the local population and clients of Parmarth Niketan’s numerous annual medical camps for the past six years. He is a well-respected health professional, with numerous ties to the community, including his position as Secretary of Rotary Club Rishikesh.

Sami Rank, L.Ac. received a Masters degree in Traditional Chinese Medicine from Yo San University, and her BA from USC (both in Los Angeles). She has been practicing for 15 years, and is on faculty at PIHMA College in Phoenix, Az where she is a professor and clinic supervisor.