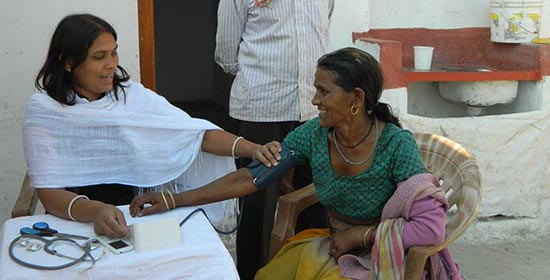 The Divine Shakti Foundation’s (DSF) Free Medical Care Camp visited Malla village, about 40 kilometres from Parmarth Niketan in the Himalayan Mountains. Because of the rough terrain, the Medical Care team had to dismount from its vehicle and walk about one kilometre up a steep mountain path, carrying the supplies. The area lacks health care infrastructure and residents are often forced to travel all the way to Rishikesh city (near Parmarth Niketan) for treatment and medicines.

The DSF Medical Camp has been regularly held in this village for more than three years. Since the last one was about six months ago, the villagers were very happy to see the team. Patients began arriving as soon as the camp was set up. 42 patients were treated and given free medicines for a range of ailments, including arthritis, high blood pressure, hyperacidity, skin infections, stomach worms, fever, cough and cold, ear infections, backache and migraine. There was a high incidence of tooth ache among children and general weakness and joint pain among the elderly. A group of labourers working at a nearby road construction site came in with several types of injuries. Their wounds were dressed and they were also given added supplies of cotton, bandages and antiseptic lotion.

DSF’s Free Medical Care Programme believes in holistic healthcare and so patients were also taught yoga postures to improve their health conditions. Toothbrushes were handed out to the children. Group hand-washing and tooth-brushing demonstrations were given. As surprise gifts, the children also received pens that were kindly sponsored by Divine Shaktis Charlotte and Shirin.

The Divine Shakti Foundation (DSF) shares its deep gratitude for its team of sevaks (volunteers), Jeet and Shereen (both from London, England) and Charlotte (from Germany), as well as Jyoti and Medical Camp Co-ordinator and Lead Dr Priya Singh (both from Parmarth Niketan), who served selflessly in this camp.