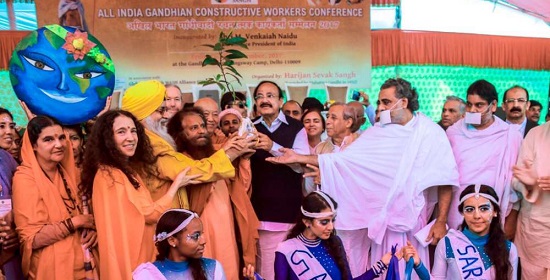 Patriotism was palpable in the massive event, as rousing speeches led the crowd towards collectively pledging for taking Mahatma Gandhi’s vision for a clean India into mission mode. The Swachh Bharat Mission, which was launched on Gandhi Jayanti 2014, is due to expire in less than two years, making sanitation the need of the day if our nation is to achieve its historic targets of toilets and sanitation for all.

On the auspicious occasion, as a symbol of GIWA’s message of Sanitation and Meditation for all the newly renovated Mahatma Gandhi Yoga Centre was also inaugurated at the Gandhi Ashram premises by the Hon’ble Vice President of India, Pujya Swamiji, Sankar Sanyalji and other eminent members of HSS. Just besides the Yoga Centre a beautiful Sanitation and Toilet Park was also toured by the Hon’ble Venkaiah Naiduji and all eminent delegates where different toilet models was shared by Jayeshbhai Patelji, President of Manav Sadhna & President of HSS, Gujarat.

Said Prof Sankar Kumar Sanyal: “It may noted that this Conference is the first of its kind after passing away of our beloved Nirmala Didi on 1st May 2008. My attempt and effort is to bring everyone together, all members of the Gandhian organisation and all faiths, now also with the support of Pujya Swami Chidanand Saraswatiji, to bring everyone together to make a world of Gandhiji’s dreams. We look forward to supporting the efforts of Swachh Bharat as a people’s movement. We are deeply honoured to have the Hon’ble Vice President inaugurate this two day All India Gandhian Constructive Workers Conference.”

Said Hon’ble Vice President Venkaiah Naidu, “Our tradition is unity in diversity. We are one nation, one people and one world. That should be our path. More than a century ago Mahatma Gandhi had given a powerful message that sanitation is more important then political independence and that cleaniness is next to Godliness which are still relevant and show the importance of this issue. Today, we need to protect this great sanskriti (heritage) of our country which is to serve and give to others before oneself- his life was his message.”

Said HH Pujya Swami Chidanand Saraswati: “Gandhiji laid a great emphasis on sanitation, to him it was greater than independence and to me Sanitation IS Meditation. As Mahatma Gandhiji emphasised that the external cleaniness (safai) and inner cleaniness (sachai- truthfulness) must go hand in hand. We must pledge today collectively and individually to BE the change and DO the change. I honour our Hon’ble Vice President for being a great inspiration to the youth and for being an example of living the principles of Gandhiji.”

Pujya Swamiji and Sankar Sanyalji honoured the Hon’ble Vice President with a khadi shawl, a khadi and elachi mala as well as a sacred Rudraksha sapling for his ever green, youthful leadership.