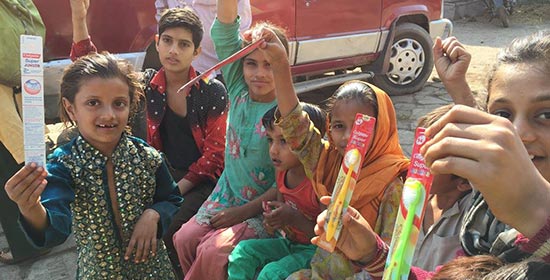 The Divine Shakti Foundation’s Free Medical Care Camp visited the Muslim community of Gujjar Basti located just outside the Rajaji National Forest, with a population of about 300. A very special collective lighting of the diya was conducted by the village heads along with members of the Medical Camp team during the visit, which happened to be on Diwali.

Forty-five people ranging from ages 2 to 65 were treated by Dr. Priya. Among the many ailments treated were an unusual preponderance of skin ailments—from infections, to bumps, to dark pigmentation spots, possibly caused by poor hygiene or bad water at the community well. Plans were made to conduct a test to see if there are contaminants in the community’s sole source of water. Also there was very high number of people describing the same symptoms of weakness, joint pains, indigestion or pain in the stomach, and itchy skin. Many of the villagers, especially the children had fungal infections in ears, hair, hands, and feet. All were given medicine for their symptoms and often bottles of vitamin complexes to boost their nutrition. A number of the children had colds, too, and cold/flu medication was dispensed to them.

Much fun was had with various circle games and hopscotch was taught to the children by Julia. Toothbrushes were handed out and songs were sung about tooth brushing and hand washing and demonstrations of group hand washing were conducted. Thirty-eight children came out for the toothbrushes and to have their teeth examined by the dentist volunteer, Dr. Chiraag while a number of more shy ones watched from the cob-and-thatch-roof houses.