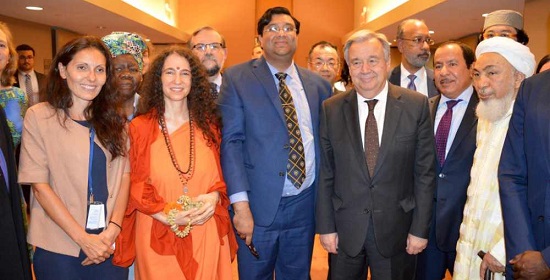 Plan of Action Launched at UN to Prevent Violence & Atrocity

Plan of Action Launched at UN to Prevent Violence & Atrocity

Religious leaders gathered at the United Nations (UN) to launch the plan of action to prevent incitement to violence that could lead to atrocity crimes in the ECOSOC chambers. The event was organized by the United Nations Office on Genocide Prevention and Responsibility to Protect in association with the King Abdullah Bin Abdulaziz International Centre for Interreligious and Intercultural Dialogue (KAICIID). The event was inaugurated by Secretary General of the United Nations António Guterres, Under Secretary General, Special Adviser on the Prevention of Genocide Adama Dieng and Secretary General of the KAICIID Dialogue Centre Faisal Bin Muammer. Sadhvi Bhagawati Saraswatiiji, President of the Divine Shakti Foundation, was an honorable speaker on the valedictory panel on the implementation of the plan of action and the way forward.

The Deputy Secretary General of the United Nations, Dr. Amina Mohammad, addressed the conference and personally thanked the religious leaders for their dedication and the commitment to this vital task. Sadhviji met with the Secretary General of the UN as well as the DSG and USG and deeply appreciated their leadership, and also warmly invited them to DSF headquarters in Rishikesh, India. Plans were made to host the next conference with the UN Office on Genocide Prevention in collaboration with DSF soon.