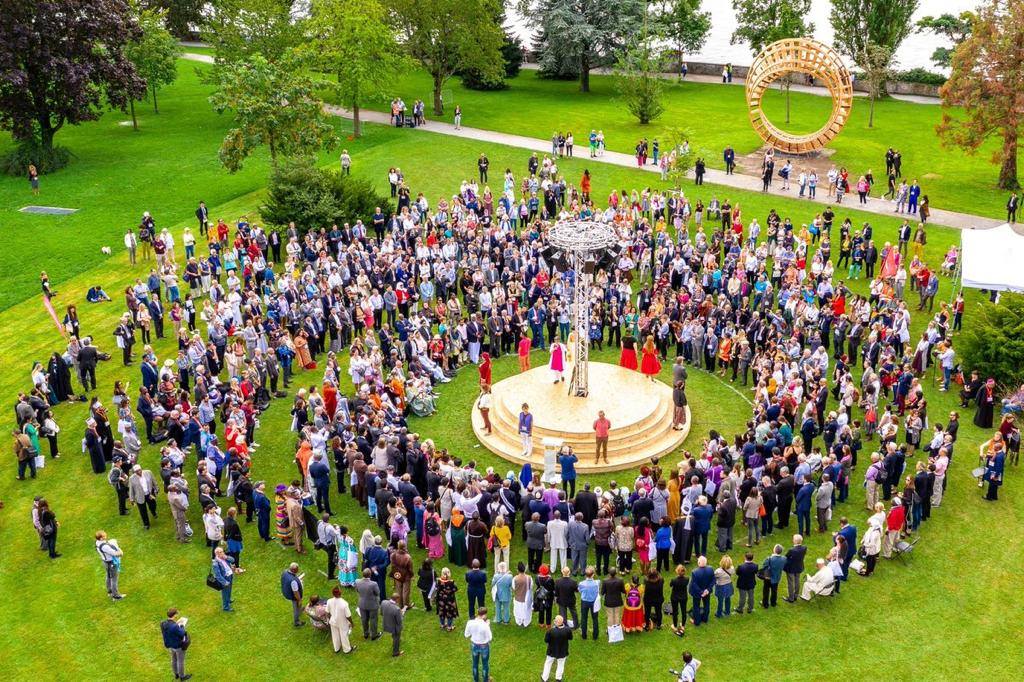 23 AUGUST RISHIKESH INDIA/LINDAU GERMANY: The 10th World Assembly of Religions for Peace convened in Lindau, Germany this week, and Pujya Sadhvi Bhagawati Saraswatiji, President of Divine Shakti Foundation, is a significant part of the multi-religious gathering that has attracted over 1000 faith leaders from over 100 countries around the world.

Such a joy to be at #Religions4Peace World Assembly in #Lindau w/nearly 1000 #interfaith religious leaders as well as the President of Germany & to pray 4 peace & walk 4 peace in #ringforpeace ceremony w/@MiguelMoratinos high representative of @UNAOC . #rfp19 #ThursdayThoughts pic.twitter.com/AqUenM0ial


Under the theme “Caring for our Common Future ̶ Advancing Shared Well-being,” the faith leaders have been joined by 100 representatives of governments, intergovernmental organizations and civil society groups in the lakeside town to forge partnerships for the common good. Previous Religions for Peace Assemblies have resulted in multi-religious projects in peacebuilding and development across the world.

The conference was inaugurated by Germany’s president, Frank-Walter Steinmeier, who declared that “Religion can never be a justification for hate and violence. No war should be waged in the name of religion. Instead of being reasons for discord and war, religions should act as tools for peace.”

“Their own aspirations,” he concluded, “should mean that religions should feel called to energetically collaborate in realising the development goals of the United Nations.”

In a beautifully symbolic and evocative ceremony, the 1000 participants of the gathering walked and prayed together for peace, then formed a circle around a beautiful “Ring for Peace” sculpture, a 7.5 metre structure made of wood from different regions of the world that will find a permanent home in a park in Lindau on the shores of Lake Constance.

Religions for Peace convenes an assembly every 5-7 years for the purpose of forging a moral consensus on contemporary challenges, electing new leadership and advancing multi-religious action across and beyond the Religions for Peace network, of which the World Council of Churches is a part. This year’s gathering celebrated significant achievements since the last meeting was held in 2013 in Vienna. That year, the committees of the Assembly committed to work better for concrete action in the members’ home country, and to exchange best-practices achieved in that work with the other committee members. The results achieved in the Middle East, Africa, Sri Lanka and Indonesia have all been highly-positive.

In the session on the role of Faith for the Environment, Sadhvi Bhagwati Saraswati Ji shared the teachings of Hinduism with regard to protection and preservation of the environment. She also shared the great role that faith plays in bringing inner peace so that we may spread peace, manifest peace and bring peace to the world, and also so that we don’t need to over-eat, over-drink and over-consume in order to fill our inner feelings of emptiness, thereby harming ourselves and our planet.