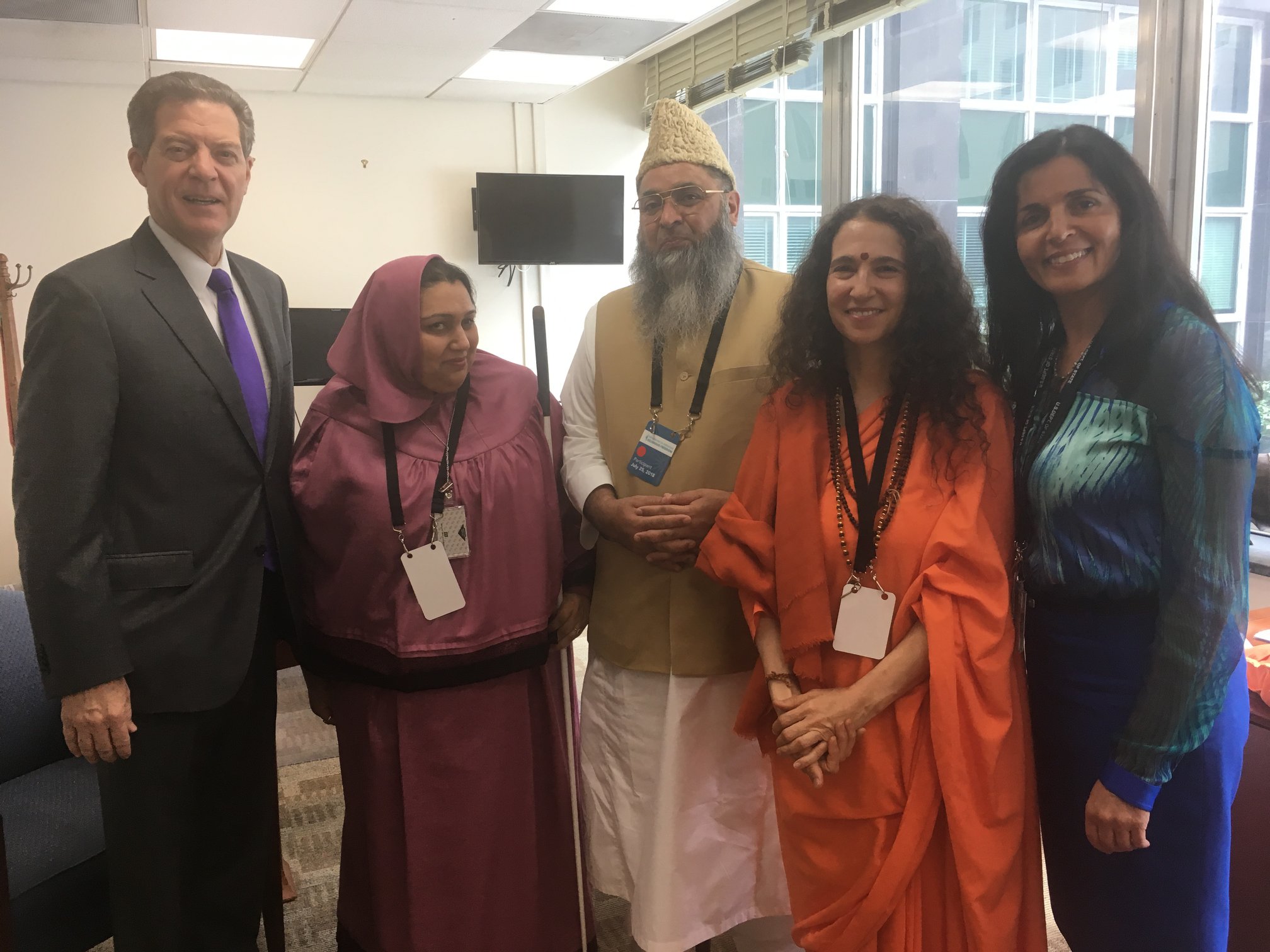 “We must connect on the fundamental level of our humanity. Before we are Hindus or Muslims or Christians or Buddhists or Jews, we are humans.” Sadhvi Bhagawati Saraswati, President of the Divine Shakti Foundation

Sadhviji shared in the main session that her strongest suggestion for the US State Department‘s international policy is that they should ensure that no American dollars or support go to any development organization that is giving care, whether healthcare or education or other, only to people of one religion, or that is compelling or urging people to change their religion in order to receive care. She emphasized that when a mother must choose between her religion or medical care for her child, that mother no longer has freedom of religion.

Additionally Sadhviji suggested that, although in America we are deeply committed to freedom of speech, we must look also at way and place in which freedom of speech impinges upon people’s right to life and right to be free of injury. We must be equally diligent about preventing hate speech which leads to atrocity crimes as we are about protecting freedom of speech.

She and Imam Umer Ahmed Ilyasi​ ji, President of All India Association of Imams with Mosques also met privately with ambassador Sam Brownback, the United States Ambassador-at-large for religious freedom. In that meeting ambassador Brownback expressed his concern about religious violence in India. Sadhviji clarified that acts of violence do not happen in a vacuum. She explained that there are, particularly in many rural and tribal areas, conflicts between the Christian missionary’s religious injunction to proselytize with the Hindu tradition’s openness and acceptance of an infinite number of names and forms of God. She explained that when people are being forced or coerced to change their religion to obtain education or healthcare or other necessities, it creates great underlying tension in these communities. That tension is what needs to be addressed, in addition to just responding to fires of religious violence when it erupts on either side.

She invited Ambassador Brownback and the team at the State Department to come to India, to Rishikesh, and emphasized her confidence that there is a way to make a win-win partnership between America and India.

In addition to the main sessions, there were break out sessions in which Sadhviji shared in a session on genocide prevention that, in prevention, we must be very aware of the de-humanization and separation of ‘us versus them’ that frequently arises and expands before acts of violence against a religious or ethnic community.

Sadhviji also spoke in a panel discussion hosted by the United States Institute of Peace, the international Republican, and Search For Common Ground focused on the role of religion, religious leaders, and interfaith peace-building on religious freedom and countering violent extremism. Sadhviji shared, in response to questions from the moderator about their interfaith peacebuilding work as Hindus, that the work they do bringing interfaith leaders together for peace and for the benefit of humanity is done not so much from the perspective of being Hindu, but rather from the respective of being human. She stared tenets of HIndu tradition that emphasize the oneness of all creation, and the infinite number of paths to God and names of Truth. She also shared the fundamental teaching of Vasudhaiv Kutumbakam, the world is one family. She emphasized the importance of bringing leaders , followers, and students of different religions together, to work together, eat together, and share together. “We must connect on the fundamental level of our humanity. Before we are Hindus or Muslims or Christians or Buddhists or Jews, we are humans.”

The other speakers at the event included:

The full video of the panel discussions are available at