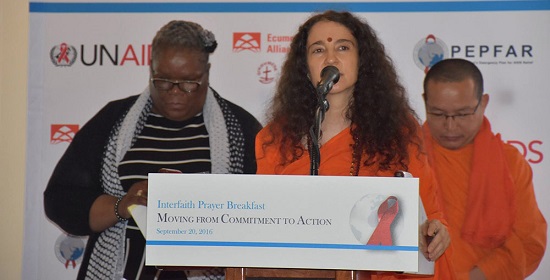 In New York, Sadhvi Bhagawatiji took part in two events organized by the United Nations. In the morning was an Interfaith Prayer Breakfast hosted by UNAIDS, World Council of Churches, The U.S. President’s Emergency Plan for AIDS Relief (PEPFAR) and United Nations Inter-agency Task force where Sadhviji gave the blessing of sharing Vedic prayers and mantras for health, peace and illumination.

In the afternoon, Sadhvi Bhagawatiji spoke on a panel moderated by Azza Karam, Senior Advisor to UNFPA and head of the UN Inter-Agency Task Force on “Keeping the Faith in Development: Gender, Religions & Health”, organized by UNWOMEN, UNFPA, UNAIDS, World Council of Churches and other organizations. They spoke about issues relating to the role of faith in aspects of healthcare, sanitation, education, AIDS and many other issues, and Sadhviji was able to share the work that our Divine Shakti Foundation is doing to empower women, their children and to protect Mother Earth.