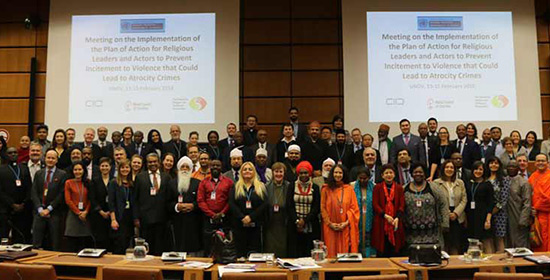 Meeting on the implementation of the Plan of Action for Religious Leaders and Actors to Prevent Incitement to Violence that Could Lead to Atrocity Crimes took place on 13-15 February 2018 at the United Nations Office in Vienna, Austria

VIENNA: More than 100 religious leaders, actors, UN officials and representatives from different countries participated in a high level conference discussing the implementation of the Plan of Action* for the prevention of incitement to violence that could lead to atrocity crime organized by the Office of Genocide Prevention and the Responsibility to Protect at the United Nations.

In December 2016 a regional meeting was held in Bangkok on the development of the Plan of Action, as part of a process called the Fez Process, attended by HH Pujya Swami Chidanand Saraswatiji, President of Parmarth Niketan, and Sadhvi Bhagawatiji. The Plan of Action was officially launched at the United Nations in New York in July 2017 by the Secretary General of the United Nations. Sadhvi Bhagawatiji was also a distinguished speaker at that event.

This conference in Vienna focused on how to now implement the Plan which has been developed and launched.

The meeting started with a warm welcome from Christine Stix-Hackl, Austrian Ambassador to the United Nations in Vienna, and opening remarks by senior officials from the organizing bodies – the United Nations, World Council of Churches, Network for Religious and Traditional Peacemakers and KAICIID International Dialogue Centre.

In his remarks, Under Secretary-General and Special Adviser on the Prevention of Genocide Adama Dieng, stated: “The Plan of Action is a pioneering document. It is the first to engage with religious leaders and actors to develop context-specific strategies to prevent incitement that could lead to atrocity crimes. I believe its implementation could contribute, not only to the prevention of atrocity crimes, but also to other key agendas of the United Nations that seek to build peaceful, just and inclusive societies, prevent violent extremism and promote the inclusion of women and youth”.

Sadhvi Bhagwatiji emphasized that “We must stop running around putting out fires of violence and atrocity crimes, and rather focus on effective fireproofing our communities so that these crimes do not arise. Atrocity crimes are rooted in separation, “us versus them,” which is why it is so important to emphasize oneness. We have found also, with our Global interfaith WASH Alliance that bringing together leaders of different religions for a common cause is a very powerful tool. Having communities serve together against a common enemy like poverty or polluted water or diarrhea is sometimes more powerful than the teaching and preaching.”

She also led everyone gathered to stand, hold hands with each other and pledge & commit that they would work together, with their own areas of influence and impact, to prevent atrocity crimes.

Important and effective steps were taken in this conference to prevent the promotion and spread of violence. Among the main points agreed on during the meeting, were: the need to map existing initiatives that can contribute to implementing the Plan of Action; collaborate on the development of a Covenant for faith actors for the realization of the Plan of Action; develop capacity-building activities for religious leaders and actors; disseminate and share curricula for interreligious coexistence; and include youth and women in all activities. Solid and concrete measures at the international, national, and local levels were the focus of the discussions.

Many religious leaders and actors present pledged their commitments and their plans to personally work for this in partnership within their networks. The meeting also resulted in the development of the terms of reference of a Steering Committee that will be responsible for overseeing the implementation process.