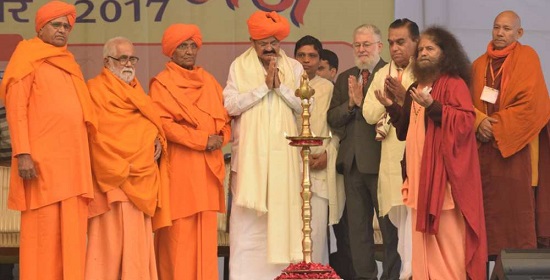 “Vedas have a great relevance to humanity in our times.” Hon’ble Shri M Venkaiah Naidu​

“Vedas emphasis one God, one Universe, one world family. Let us impart this wisdom in our education system to cultivate humanism.” Pujya Swami Agniveshji

“Knowledge from the Web must be combined with Wisdom from the Vedas for speed as well as direction.” Pujya Swami Chidanand Saraswatiji​

The event started with a beautiful ‘havan’ (fire ceremony) for world peace and environmental preservation amid chanting of the Vedic hymns by Hindu and Muslim women and girls to showcase that the ancient scriptures are available for the whole mankind to derive its benefits.

Thereafter there was a beautiful lamp lighting ceremony with all of the dignitaries and words of inspiration and motivation.

Hon’ble Vice President of India said that underlining that the Vedas are the earliest works of ancient knowledge and philosophy in India, the Vice President said our civilization, culture, thoughts and philosophy are rooted in the Vedas. He said the Vedas are the source of knowledge and guide us to advance in economic, social, educational and political fields and also in maintaining high moral and ethical standards.The Vedic philosophy states that truth, non-violence, patience, penance and spiritual uplift are the foundations of a human life. Vedas convey the message of religious harmony, equality and nation’s progress. Quoting the Rigveda, Verse 5.60.5, Shri Venkaiah Naidu said no individual in the society is either big or small, according to Vedas.The Vice President said Maharishi Dayanand Saraswati, the builder of modern India and Founder of Arya Samaj, had given the message “Back to the Vedas” to the world. This has been endorsed by the renowned Orientalist, Max Mueller.  Renowned philosopher and Nobel Laureate Maurice Maeterlinck had said the Vedas are the only and incomparable source of all knowledge.

Click here to read the Office of the Vice President’s press release.

Pujya Swami Agniveshji said, “All the major religions of the world have been inspired by the core spiritual values of the Vedas – one God, one Universe, one human family- but the clarion call for Humanism, Manurbhva, that is to be Human, got distorted. We Indians should be proud of the fact that the efforts of our Prime Minister Shri Narendra Modi and his government has succeeded in making Yoga an international household buzzword and practice and our new mission should be to make Vedas and Vasudhaiva Kutumbakam a global mission. Finally, I support the main resolution of this Conference to introduce the Universal Spiritual Values of the ancient most scriptures – the Vedas in the Education system towards value orientation inculcating Humanism as Dharma.”

Pujya Swami Chidanand Saraswatiji said, “Along with surfing web pages we must not forget to read and reflect upon our ancient and timeless Ved pages. India is a country where knowledge from the web can be combined with wisdom from the Ved. This will ensure that our speed and growth has a direction and is truly sustainable. This will also ensure that our development is one that is in harmony with our environment and is inclusive of all humanity regardless of caste, colour, creed, race, religion and region. We must also not just read and know the Vedas but if we must live the Vedas.”

Click here to watch Pujya Swamiji’s compassionate and passionate speech about how the Vedas teach us how to not have more but rather to be more and live more, to take less and to give more, and how to truly serve and love more.

Each day will begin with the sacred fire ceremony. Many couples having interfaith and intercaste marriages will be felicitated during the three-day event.

A special session on the World Parliament and endorsement of the Constitution for the Federation of Earth, and Veda, the United Nation’s Sustainable Development Goals (SDGs) and declaration on human rights will be other salient features of the conference.

The valedictory function of the conference on the 17th December will be attended by former president Pranab Mukherjee.