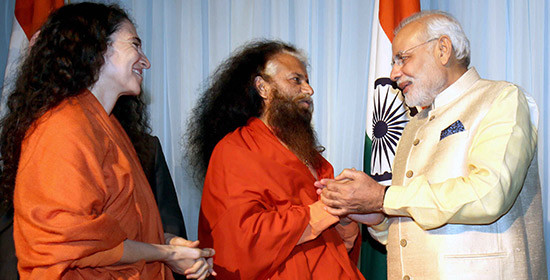 Pujya Swamiji and Sadhvi Bhagawatiji had traveled to New York at the end of September for two major summits on Climate Change and faith leaders. Serendipitously, Shri Narendra Modiji’s plan to visit the United States for the United Nations General Assembly Week was finalized and Pujya Swamiji was invited and  requested to stay back in New York for the programs with Shri Narendra Modiji. Those programs included the famous Madison Square Garden event and a much smaller, VVIP dinner at the Pierre Hotel. While there Pujya Swamiji spoke with Shri Modiji about plans for Ganga and for bringing improved Water, Sanitation and Hygiene to India. Shri Modiji was so glad to see Pujya Swamiji, and they spent beautiful time together.

Pujya Swamiji and Sadhvi Bhagawatiji were interviewed by ANI and Zee TV after the event as well, regarding the impact of Shri Modiji’s visit. Pujya Swamiji emphasized that “Shri Modiji turned Madison Square into Modison square today.” When asked “What happened today?” He replied, “India happened today!”

Sadhvi Bhagawatiji explained: “Everyone knows about the success of India; Shri Modiji showed also the spirit of India! he is truly a global leader with space shuttles on one hand and toilets on the other.”